This is a story about a small studio apartment in Warsaw.

I believe in making well-designed spaces, against the trend of optimizing ROI on rentals. I wish people living there to have a good time and respect the space. I think this is going to result in better tenants, fewer problems and will pay off long term ● 1 ●
Note 1
I lived there for a 6 months, and did not approach this as a cold-blooded investor. I think it would suck the fun out of it.
.

I’ve seen a few apartments and always thought that “I will just know when I see it”. That’s exactly what happened.

I’ve found a very minimal 25m2 apartment ● 3 ●
Note 3
There is an interview with the previous owner and his apartment project (in polish language).
. A often-traveling art collector was living there and was looking to sell. Below are original photos from the posting.


Bedroom
This had to be arranged very early, the radiator is not even there yet. 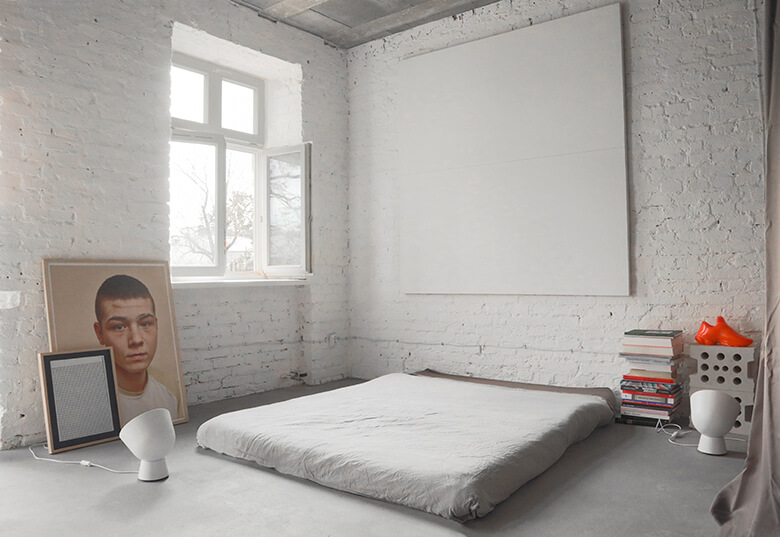 The painting
Justyna Kisielewska, Vadi – room, 2009, acryl on canvas, 180 x 190 cm. The previous owner bought a 2x2 meter museum-grade frame for the painting. Bathroom 🛀
The original bathroom was behind a curtain. Very romantic, and overall nice idea, but I had to change it. More on it below.. 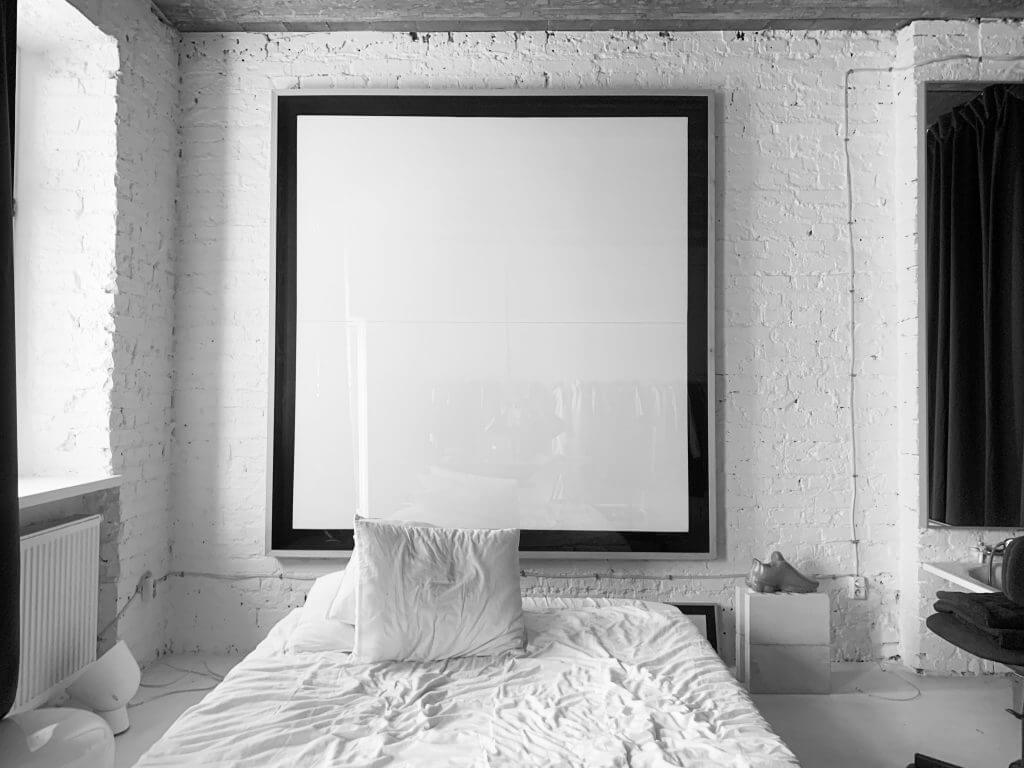 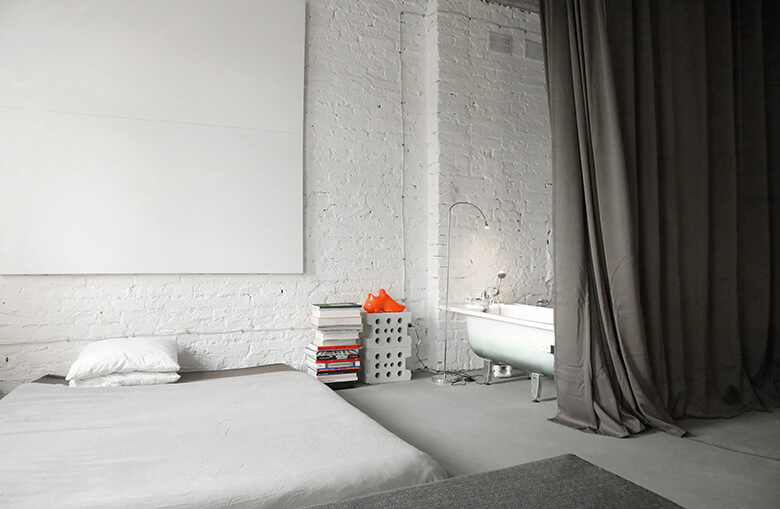 I decided to buy, and after some negotiation, we closed the deal in April 2020.

The apartment was sold for about $75k. I think the price per meter was pretty high, but it tends to be so for small apartments. FYI, the seller bought this apartment from a developer who was reconstructing this building in 2016 for half the price I paid in 2020.

I’ll start by admitting that I love raw materials and honesty. I don’t like blends, plasterboards, or floor panels. I can see the appeal, to make a homey environment, but it was never for me. I’m a fan of industrialism, brutalism, and lofts. With these preferences and Dieter’s Rams principles ● 4 ●
Note 4
I love Dieter Rams and his artistic and industrial vision. Read more on wiki, especially the design principles.
in mind, I started to design the space. 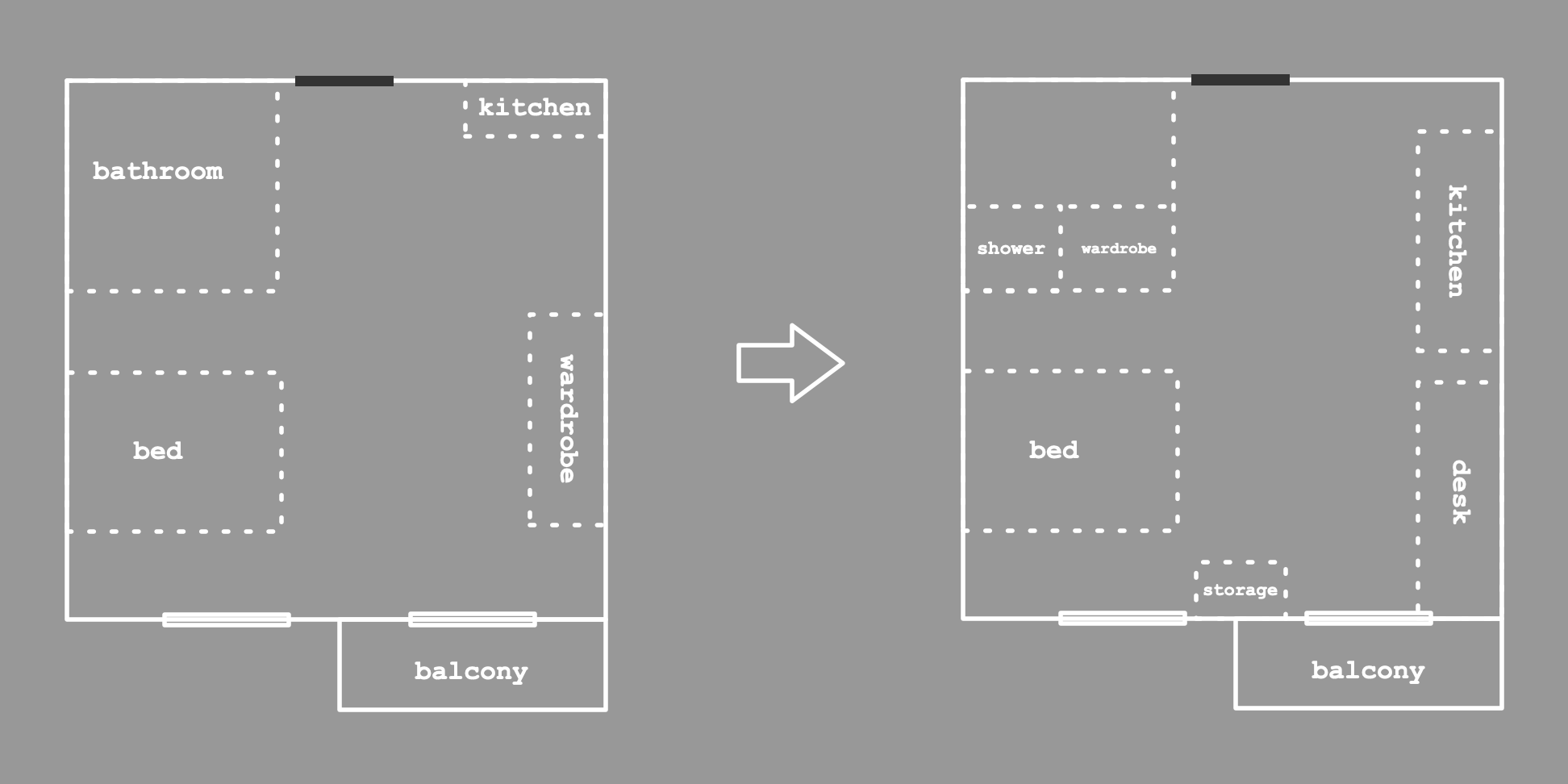 The main problem with the apartment was an almost complete lack of storage. There were six big drawers under the bed and clothes racks. That is not enough to keep all the shoes, clothes, cardboards, etc.

The other thing that I wanted to change was the bathtub. It was looking great in pictures, but in reality, it was small (140cm) and not so convenient. The space above the bathtub was unusable, which was a huge waste. I decided to change it for a shower. That decision gained me an extra 80cm2 with full height, exactly what I’ve needed for storage.

Pretty quickly I’ve exhausted my 3D designing capabilities ● 5 ●
Note 5
I bought a mouse and was all set to learn Fusion360. However I had a lot of work during that time and happily delegated it. I still have some unresolved interior/industrial designer inclinations…
, and decided to hire an interior architect. I’ve contacted my architect friend Igor Bętlejewski (whom I’ve met on a skate trip), and we agreed to work on this together.

I couldn’t see this bathroom being a separate room with walls. Instead of dividing the space, I wanted to install the bathroom in a way that is private and not obstructive. To achieve this goal, we set to use perforated steel and glass to build the bathroom and storage. Also, we decided to make it all white, to brighten the space. (pinterest moodboard) 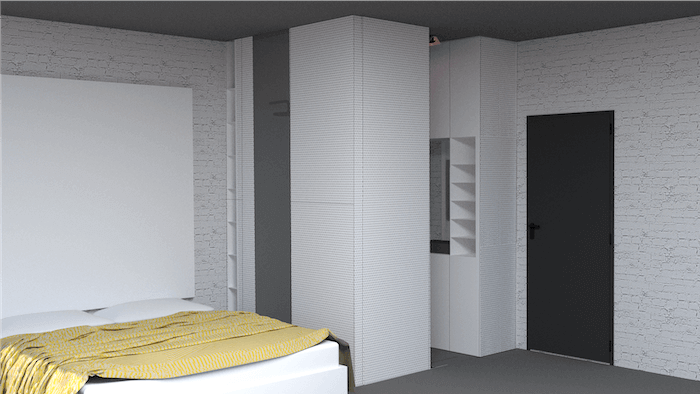 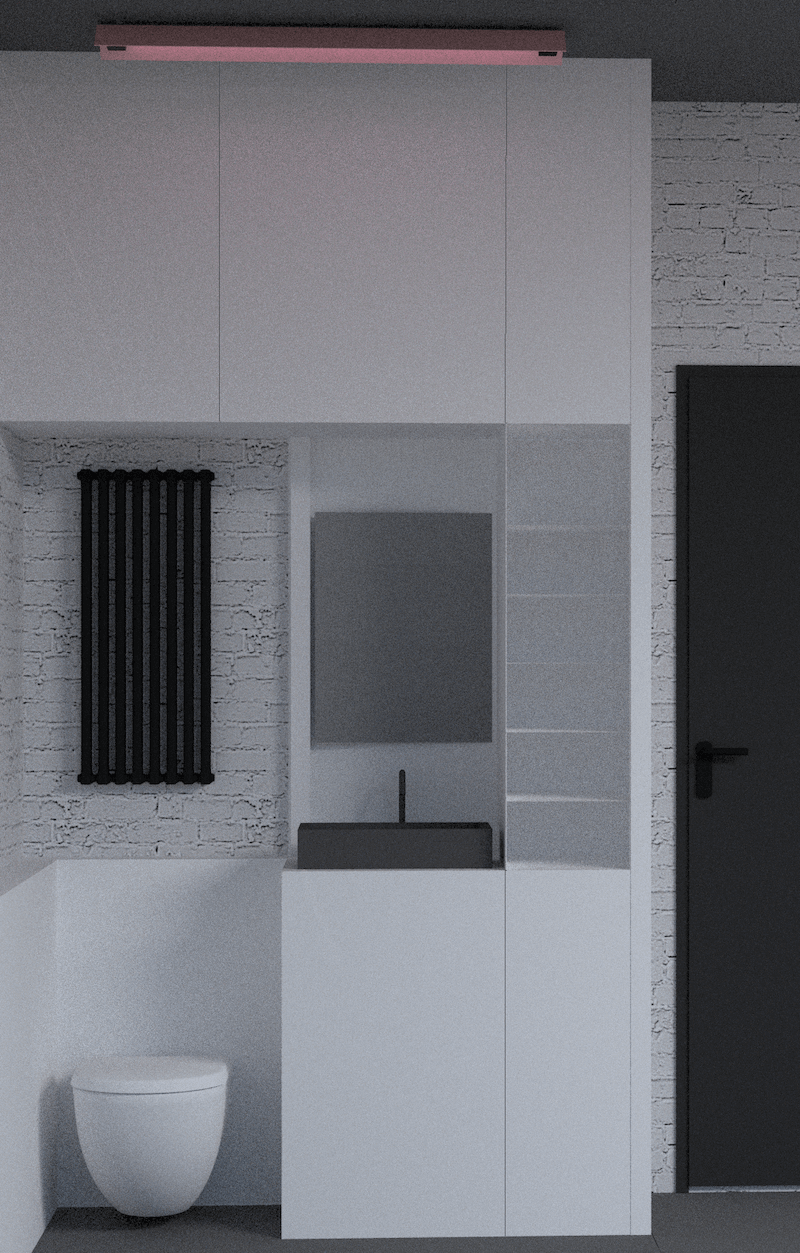 Igor helped me to design and visualize the concept, and that was the easy part. The real challenge was to find a company that could deliver it within a budget. We probably spent another few months talking with companies, and eventually came to an agreement with the best steel craftsman in Warsaw.

Seb was up for a challenge to make a detailed design, order all the materials, weld them in his workshop, install them in the apartment and connect all the bathroom necessities. I can’t describe my gratitude for this man. It was a big project, and he delivered it on his own.

The closed cube
This is the clean look we were targeting. I’m absolutely happy with it, we have also installed LED on top of the shower as well as on the mirror. The open cube
It’s insane how much stuff can fit in here. There is also a hidden shelve at the very top accessible from the bathroom. 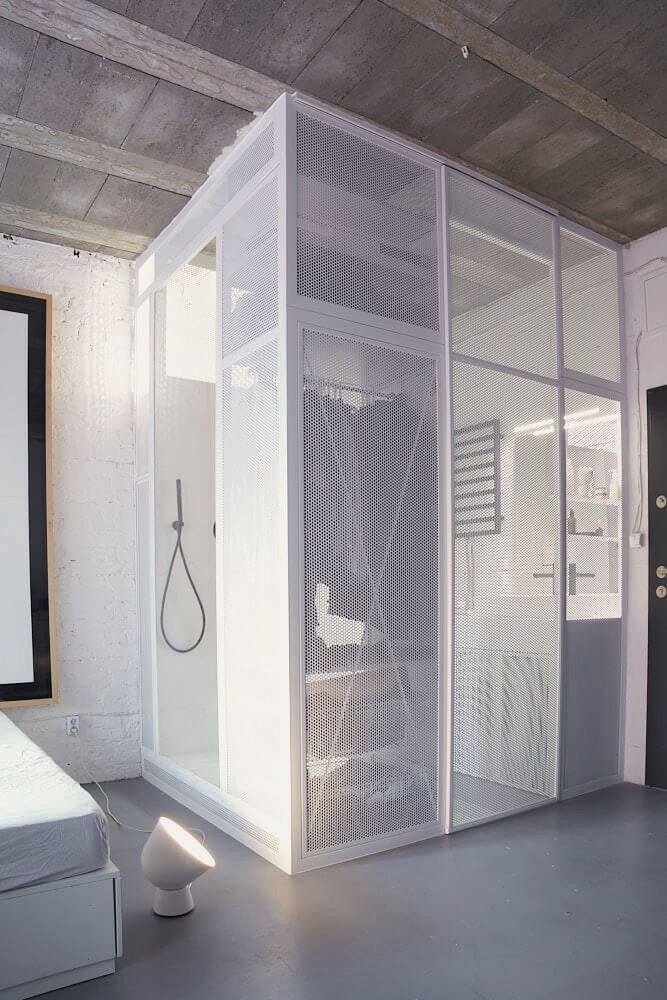 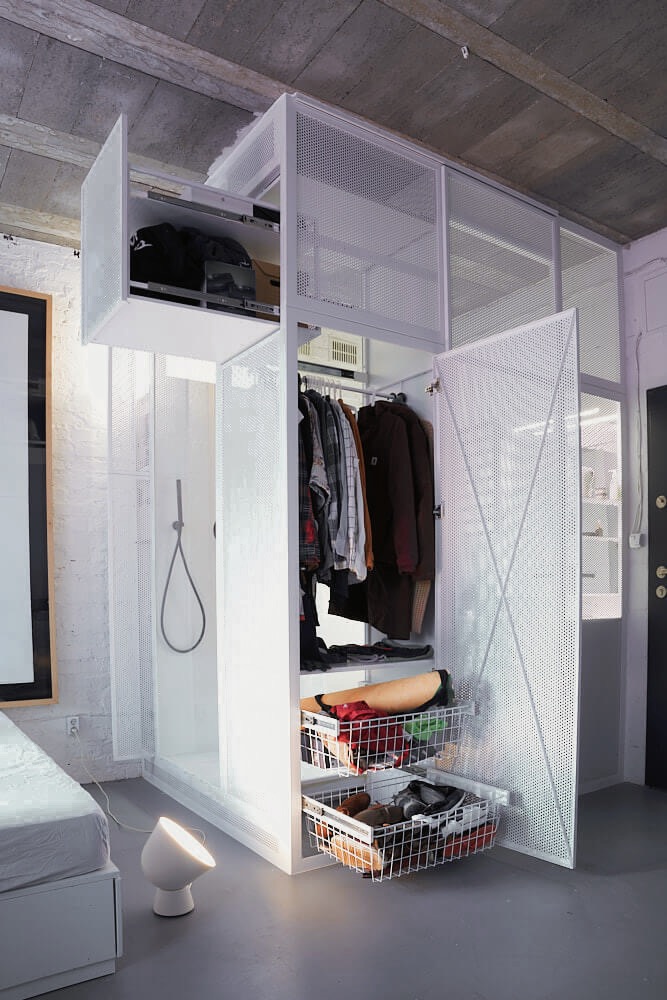 If you are interested in seeing more pictures of the installation, please check this album.

I’ve one more thing to show… And you’ve guessed it, it’s a steel kitchen 🙃. The apartment came with a very-very simple kitchen that I needed to replace. I was looking around for a stainless steel kitchen and found an awesome company called Alpex Inox. It’s an Italian company that specializes in high-end kitchens. The only problem I had with them is that the prices were out of my reach.

Now, if there was one good side to the 2020 covid pandemic, it was that restaurant furniture manufacturers were having a downtime. Through a friend, I’ve learned about JG Gastro a Cracow-based company specializing in stainless steel kitchens that also makes custom projects.

I’ve reached out to them and had the pleasure to work with a very knowledgeable sales representative and designer who helped me shape this project.

Under the strict budget, with the inspiration from Alpes Inox, and the know-how from JG, a dream kitchen became a reality.

Stainless steel kitchen
I love how it looks. The corner was pretty hard to fill, The trashcan is installed there, but it could be better. 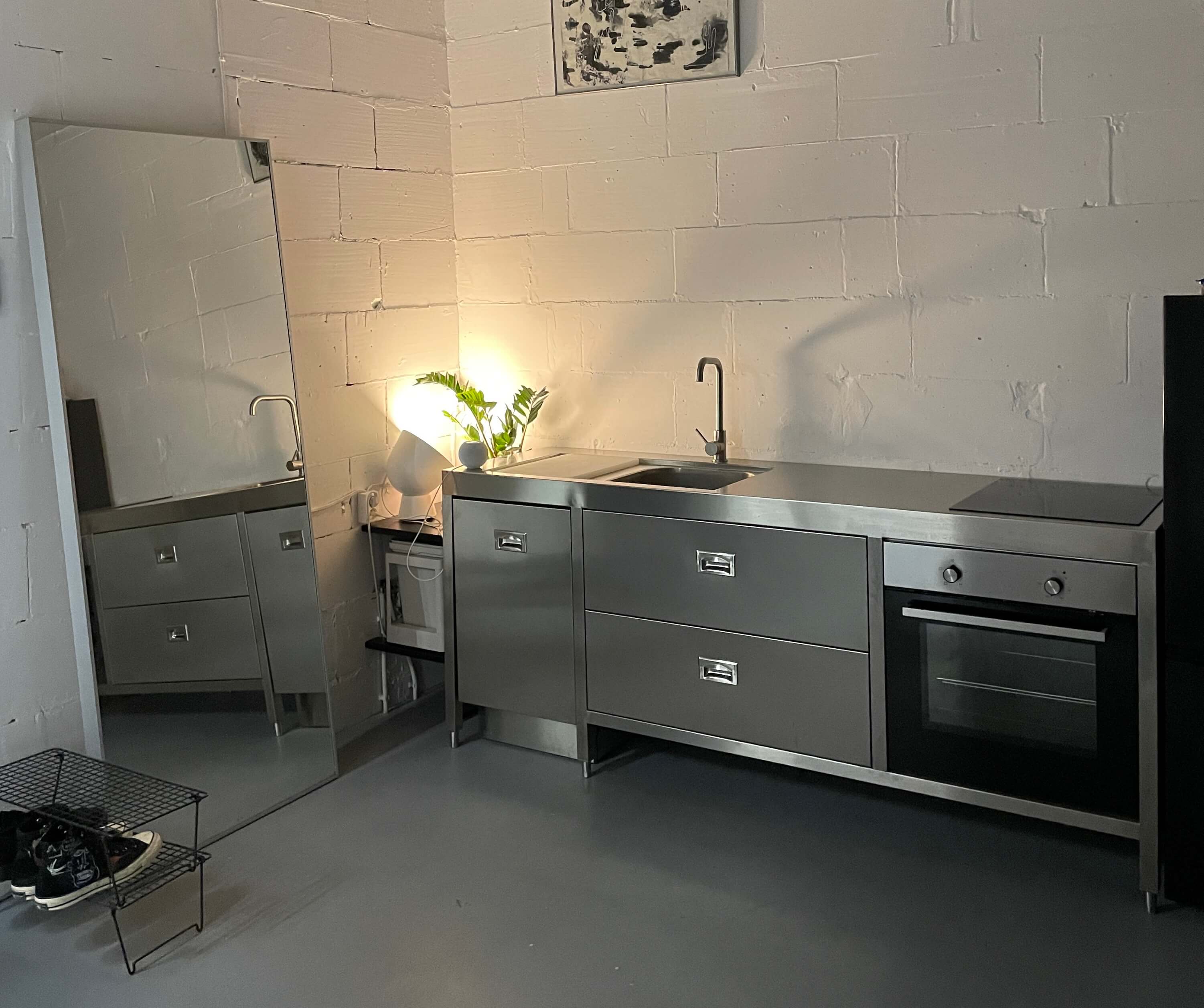 The kitchen features a sink, two drawers, a dishwasher, an oven, and a heating plate. It’s 90cm in height, 210cm wide, and 60cm deep. It’s a perfect setup for a single person who is not crazy about cooking.

I’ve been living in this apartment for six months, and I had an awesome experience. What I love the most about this space is that it feels like a studio. It welcomes work, it encourages tinkering. I felt very productive there, and there was always something more to do. After the bathroom was done, I moved out to live with my girlfriend and the apartment was rented to my friend. 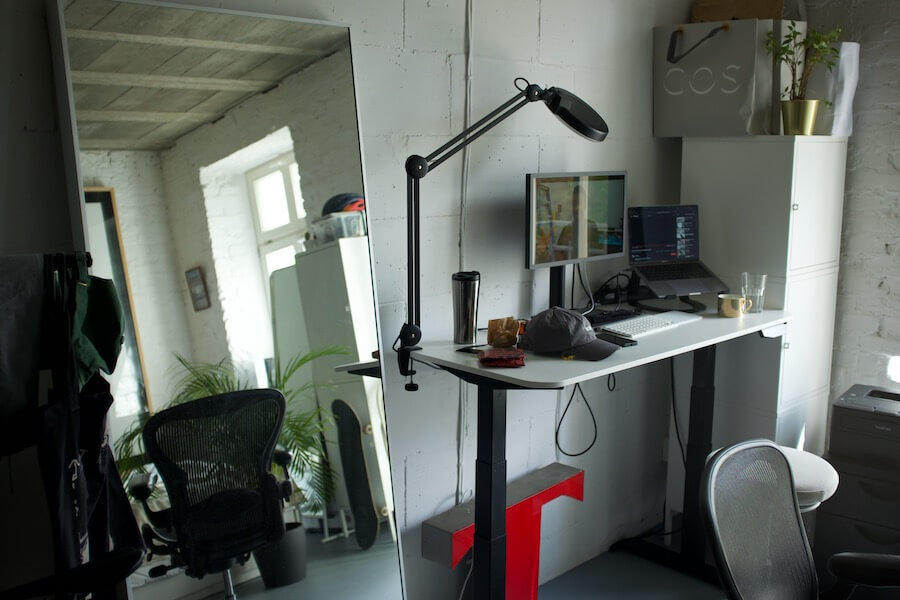 This is my favorite photo from my time there, more on flickr

● 1 I lived there for a 6 months, and did not approach this as a cold-blooded investor. I think it would suck the fun out of it. ↑ ● 2 Ideally from floor to ceiling, but that's hard to find in Warsaw. Actually what I found has a good ratio of window to apartment size. ↑ ● 3 There is an interview with the previous owner and his apartment project (in polish language). ↑ ● 4 I love Dieter Rams and his artistic and industrial vision. Read more on wiki, especially the design principles. ↑ ● 5 I bought a mouse and was all set to learn Fusion360. However I had a lot of work during that time and happily delegated it. I still have some unresolved interior/industrial designer inclinations... ↑