I have been looking on the internet to find some information on hosting AI training software with little luck. Here is my setup, maybe it will help you make better decisions.

With a strict budget limit of $15k, we are not going to outperform Alibaba servers, but we will setup a decent training rig with secure object storage. 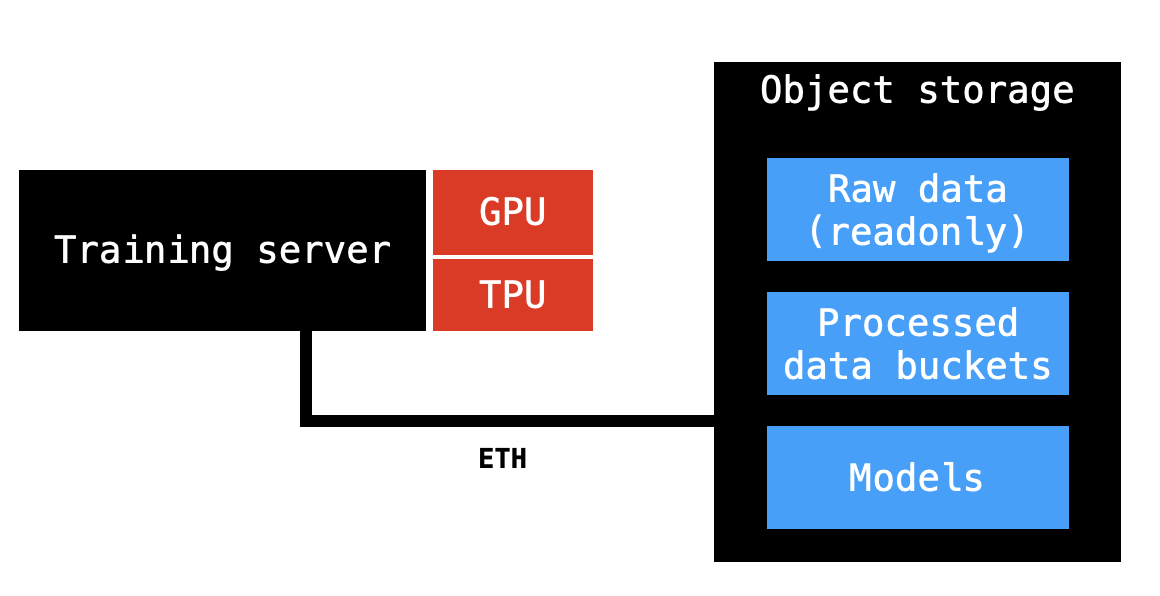 Labeled data will keep flowing from collection sites. It will be put in a readonly bucket. Experiments will need differently processed data, so a processed data will be stored at different buckets. The Object Storage server should be able to handle all that securely and efficiently.

This training setup is suppose to suit our specific use-case, which includes PII data. If that wasn’t the case I would go with one of the cloud services.

A few open source object storage solutions are available, I chose min.io. For extra security it is configured in SSE-S3 mode, where the secret key is managed by outside KMS.

For running experiments we use Jupiter Lab. We have created a shared space on disk to be able to share notebook without the trouble of going through git repos. A Coral TPU M.2 is connected to the AI server to run quantized neural networks the same way as they are on the Edge.

For data versioning we stick with DVC, which makes some redundancies but is really helping to organise training.

Experiments are being tracked using Weights & Biases. It is a pretty expensive service, but we found it the easiest to use. We also use W&B Sweeps to automate the hyperparameter tunning, it is very convinient.

W&B is an outside service, so we don’t post any data there. At some point plan is to use on-prem experiment tracking.

In Part two I will share how data flows during the experiment.

Let me know on twitter if you enjoyed this read.

Since Apple released Swift, a lot of people were eager to use it, but some of us don’t start new projects that often. Newcomers don’t even learn Objective-C anymore. In our iOS community we never had a chance of writing in a new language. The last update I remember, was Modern Objective-C, which brought us few useful things, but the changes were small. We had Convert to Modern Objective-C Syntax button, that mosty did the job. It’s also worth remembering that with Swift, we also got update for Obj-C. Also, remember the days of gcc? Since Apple compiler change, the things started to develop in a faster pace.

So, if you’re wondering whether you should port you app to Swift, this is my advice.

Wait for the ocasion. Look for:

In my case it was new UI. We made a decision to wait with Swift, and start incorporating it with the new UI. It went better then expected. What we thrived to achieve is to leave model data, communicators, managers in Obj-C, and make a Swift UI layer on top of it. The results are fantastic, we have divided “backend” and “frontend” of the app. A lot of functions, were moved from ViewControllers to Obj-C managers, along with relevant getters we needed for the UI.

I won’t get into details, because here is a great intro.

My notes on mixing Swift with Objective-C:

How to make bitcoin a better currency

Dump from a presentation I gave at the uni.

There are some simple guidelines defending against the attack

How to make bitcoin a better currency